In the mid 1970’s an unknown writer/actor got divine inspiration after watching a fight to write a movie about a boxer.  He knocked out the first version of the script in 3 days.

Later he would go for an audition that he wasn’t suited for, and would casually mention to the producers that he had written a script about a boxer.

The divine would intervene again and the producers would actually read the script.  At the time the actor had $106 in his bank account and had to sell his dog the week before because he could no longer afford to feed it.

The producers would offer him $25,000 for the script but said the actor couldn’t be in the movie.

The actor turned it down.

The script would start to get traction and a bidding war would ensue.  They would end up offering him as much as $330,000 (equivalent to more than $1 million in 2017).

The actor said no.

He desperately needed the money but a voice inside of him kept saying he couldn’t take the money if he couldn’t be the lead in the movie.

He NEEDED to be in this movie.

His car would die on him.

If he took the money  life would be easy, he could fix all of these problems.

He decided to just ride the bus.

Every time he felt like saying yes to the offer something inside of him would yell “NO!”.  Not until they let you be the lead in the movie.

He decided to be obedient to the voice inside of him.

The producers eventually gave in and let him star in the movie.  In his movie.

The movie would be shot over a week and a half on a shoestring budget and be released to the public 10 months later.

It would go on to win the Academy Award for Best Picture.

It would inspire millions.

And it would forever change the life of the actor…

Today as I travel to Philadelphia for work, I got to run up the famed Rocky steps (Philadelphia Museum of Art). 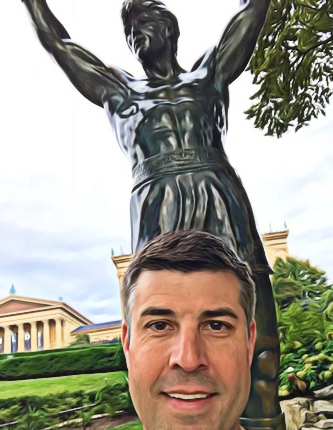 I arrived at the steps a little after 7am and basically had them all to myself.  I ran up and down the steps twice.

By the time I got up the second time a bus full of Italian students had pulled in front of the museum.

As they filed off the bus I watched them gather for a group picture and then they all took running up the steps, just as I had. 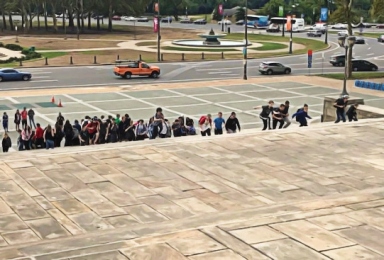 Just as millions have over the years.

A security guard saw me watching the kids and said “it’s crazy that these buses will keep coming all through the day.  Probably the only set of steps everyone feels compelled to run up.”

It’s amazing to think that a movie made more than 40 years ago is still having this effect on people.

It’s amazing to think what happens when you listen to the divinity inside of you.

A blog to share Stories, Thoughts, and To Do Lists View all posts by Rich