About two months ago, a friend of mine quit her job.

It wasn’t planned or calculated.

She had gotten on a routine conference call and when some work decisions came up that she didn’t agree with, she suddenly felt something inside of her tell her that this was no longer the job for her.

She turned in her resignation on the spot.

And as she did she was filled with the weird sensation of feeling invincible and relieved at the same time. An overwhelming peace rushed over her and she felt oddly calm even though she had just radically shifted her life. It was a feeling that confirmed in that moment that she had made the right decision.

But as time passed, so too did those feelings.

In the weeks that followed she predictably started to ride a roller coaster of emotions. The adrenaline of that moment had long since evaporated into thoughts of doubt and guilt, and she began to regret making such a rash decision.

I have been fascinated with these moments of inspiration for a long time. These feelings in your gut that bubble up out of nowhere and tell you to do this or that.

I have felt this spark many times. Sometimes it has told me big important things like “marry her” or “take that job” but mostly it tells me smaller things like “introduce yourself to that person”, “go on that retreat”, or “eat lunch at that place”.

No matter how big or small though, every single time I follow this guidance something unexpected and positive ALWAYS happens.

Sometimes it has helped me meet incredible people and presented life changing opportunities. Other times it has simply given me an encounter that put a smile on my face and reminded me of this amazing gift I have called life.

The crazy thing though is that I still choose to ignore these glimpses of inspiration more often than not. I’ve become habitually more comfortable with the security of the path that I can control in my head, instead of choosing the path leading me into the unknown.

I’ve tried to figure out why I wouldn’t do something that always has positive benefits, and as I pondered that question a friend of mine recently reminded of a time one of my boys decided to follow his gut instinct. So I decided to try to analyze my son’s experience in an effort to help me understand these divine moments a little better.

In late October I picked up my two oldest boys, Patrick and Will, from school. As they walked to the car I could tell Patrick was excited about something as a huge smile was plastered across his face.

As soon as he got in the car he shouted with enthusiasm “Dad I signed up to do Devos!!!”.

He told me it stood for Devotionals and was where you stand up in front of the whole middle school and give a speech about your relationship with God.

Made sense but I was still a little confused “So, your teacher asked you to do this?”

His answer stunned me.

“No I just kind of felt something inside of me telling me I needed to do this, so I went and asked if I could give the speech.”

As we pulled out of the parking lot, I caught a glimpse of Will in my rear-view mirror. He was completely shocked and immediately started firing off questions to Patrick. “Why in the world would you do that? Why would you want to stand up in front of 500 people and give a speech? Who does that?” “Seriously Pat are you nuts?”

I didn’t say anything, but I kind of thought the same thing.

Patrick quickly dismissed Will’s questions, and in fact the next day he hopped in my car with the same energy and excitement to tell me had also suddenly decided to run for Governor at an upcoming Youth Legislature Day. This would require another speech, again in front of a couple hundred people.

He was clearly on a roll, and the news of his upcoming speeches spread like wildfire. Family and friends began calling Patrick to congratulate him on volunteering for Devos and Youth Legislature, and his teachers made a really big deal at school of him running for Governor. Patrick LOVED all the attention and applause he was getting.

And then a funny thing happened…

and the adrenaline of following that voice in his heart began to wear off,

and was replaced with doubts in his head.

He started to picture all the people that Will had mentioned that day in the car, and he wasn’t so sure that he really wanted to do this anymore. He started thinking more about how he could mess up, then how he could succeed.

We started working on the devos speech at home and at school he began meeting weekly with his History teacher to work on his Governor’s speech. He began seeing how much work all of this entailed. If he’d known the work he’d need to do on the front end, chances are he never would have signed up for this.

A scheduling conflict at the school pushed the Devos speech back to February and then back again till March. He would now give his devotional just a couple of days before he’d have to give the Governor’s speech. Each time the speech was moved, Patrick became a basket case. Part of him wanted to just do the speech and get it over with, and part of him wanted it to just be delayed forever.

It seemed like an eternity had passed from the time he had signed up, but the week of his Devos speech finally arrived. Patrick’s vision isn’t very good and as a result he would have to memorize the entire presentation instead of being able to look at notecards to prompt him along. Just a couple of days before he would stand in front of the entire middle school his brain turned to mush, and he couldn’t seem to remember anything. He practiced over and over but never seemed to be able to make it all the way through the speech. He desperately wanted to give up, but the thing was he simply couldn’t. The teachers had re-arranged the school day to have this Devos talk, and Patrick was the only speaker. Nerves started to kick in big time and he barely slept the entire week.

Getting out of the car on the day of the Devos Speech, Patrick nearly burst into tears he was so nervous. His doubts magnified to such a level that they became almost crippling, and each passing minute brought more ideas on all the ways he could mess up.

But the moment finally came.

His heart beating so fast that he thought it would pop out of his chest as he walked to the stage.

Then he started, and….

It was as if the power that told him to volunteer for this talk so many months ago, suddenly showed up again and gave him the strength and composure to get through it. The words he had stumbled on so many times, now effortlessly flowed from his mouth. He was funny, he was honest, and he allowed himself to be completely vulnerable.

8 minutes later he would walk off that stage a different person, simply because he was now on the other side of fear.

And on the other side of fear is ALWAYS something beautiful.

A couple of days later he would go through the same cycle as he prepared for his Governor’s speech. And as he walked to the podium his nerves would be replaced again with the inspiration that filled his heart to sign up for this. He somehow beat out the other awesome candidates who gave great speeches, and was elected Governor by the 260 students that attended. He got to spend the next two days in a mock government where he was treated like royalty.

After the speeches Patrick’s confidence soared as he was able to see a different side of himself.

I knew these experiences provided an opportunity for my son to grow, but what I didn’t anticipate was the outpouring of love and support that came from all over the place.

It’s been over 3 months since he gave those talks and I still get stopped on a weekly basis from people that tell me how touched they were by Patrick’s devos speech.

Because of social media people have seen it across the US, as well as London, Canada, Paris, Germany, and Australia. I was told a family in India watched it, and locally the video was shown to several church groups. And then after he won the Governor’s spot at Youth Legislation a family member arranged for him to meet the actual Governor of Louisiana. 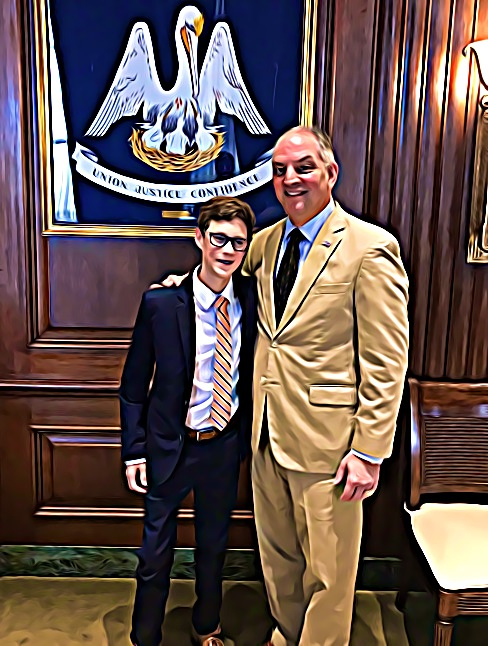 We could have never predicted any of this back in October when he signed up for the speeches.

Patrick did an amazing job with his devos speech, but it’s certainly not the greatest speech of all time. So, I wonder does the speech resonate with people because he is a kid that faced his fears and talked in front of a large group? Or does it resonate because he talks about the challenges with his vision and maybe people can relate to that in their own lives?

I’m not sure, but the more I think about it, I believe it resonates with people simply because it was carried out through inspired action. For to be inspired means to be “in spirit” and therefore acting outside of oneself. These actions create a ripple effect that can only be caused by God, and the impact is so much greater then we can ever imagine.

I think about my friend who quit her job by following her gut instinct in that moment. I talked to her recently and while she doesn’t have a new job, she is incredibly grateful for the time she has been able to spend with her oldest daughter before she leaves for college. She told me that that time has been more precious to her than anything. She is not sure where her path will lead, but her time with her daughter has renewed her spirit that she made the right decision.

A blog to share Stories, Thoughts, and To Do Lists View all posts by Rich